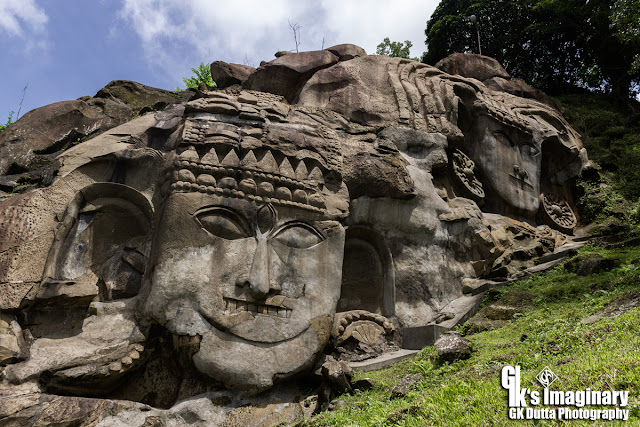 Tripura has beautiful rock cut carvings and stone images at Unakoti is a profusion of rock-cut images, belonging to 11-12th century A.D. , intricate and finely executed. This is as such an open air art gallery. Truly, over the backdrop of widespread hill ranges, surrounded by lush green and bush, a large no. of colossal figures of Hindu gods & goddesses engraved in a 45 mtr. Hillock. The place is 8 KM from District hq. Kailashahar and 180 KM from capital Agartala. 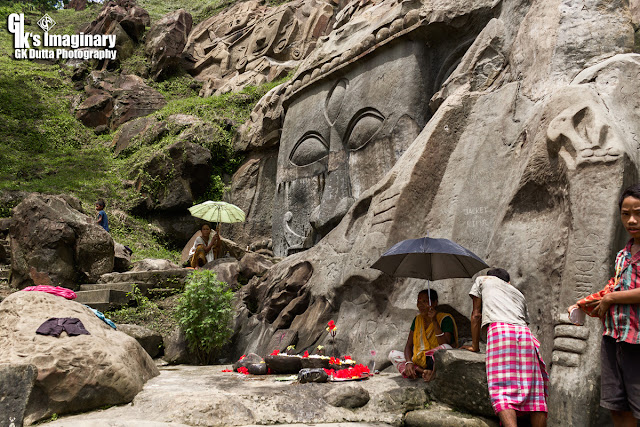 The marvellous rock carvings, murals with their primitive beauty, waterfalls are not to be missed. Unakoti means one less than a crore and it is said that these many rock cut carvings are available here. As per Hindu mythology, when Lord Shiva was going to Kashi along with one crore gods and goddesses he made a night halt at this location. He asked all the gods and goddesses to wake up before sun rise and proceed for Kashi. 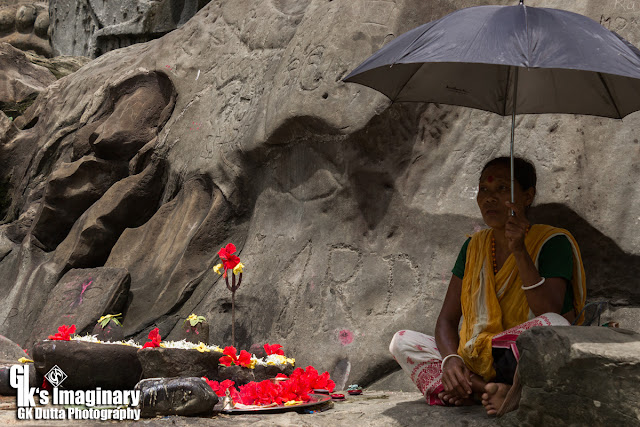 It is said that in the morning, except Shiva himself, no one else could get up so Lord Shiva set out for Kashi himself cursing the others to become stone images. As a result we have one less than a crore stone images and carvings at Unakoti. These carvings are located at a beautifully landscaped forest area with green vegetation all around which add to the beauty of the carvings. The images found at Unakoti are of two types, namely rock-carved figures and stone images. 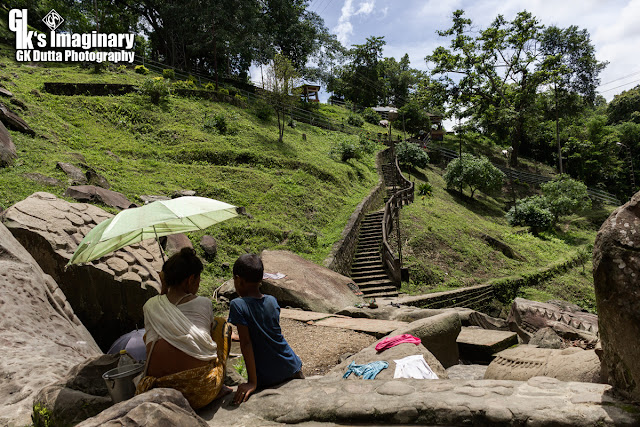 Among the rock cut carvings, the central Shiva head and gigantic Ganesha figures deserve special mention. The central Shiva head known as ‘Unakotiswara Kal Bhairava’ is about 30 feet high including an embroidered head-dress which itself is 10 feet high. On each side of the head-dress of the central Shiva, there are two full size female figures – one of Durga standing on a lion and another female figure on the other side. In addition three enormous images of Nandi Bull are found half buried in the ground. There are various other stone as well as rock cut images at Unakoti. Unakoti is termed as “Shaiva-Tirtha” which is visited by thousands of pious people from all over the region particularly during Ashokastami Mela in March-April to take a holy dip. 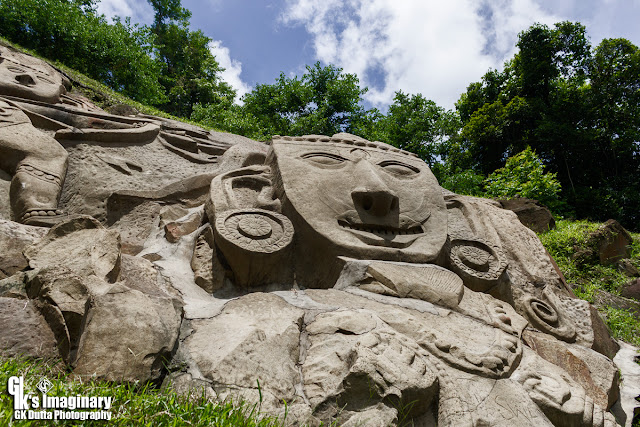 MYTHOLOGICAL SIGNIFICANCE: There is much hearsay about Unakoti, the place of pilgrimage. The name Unakoti is derived from the thought that there was an assembly of gods and goddesses numbering one less than a crore . At a point of time the Lord of the gods, Mahadeva accompanied by the gods started for Benaras (Varanasi). When they reached at Raghunandan Hill, they decided to spend the night at the place and then start for Varanasi the next morning. But in the hours of dawn, only Mahadeva woke up. Then the Lord of the gods left for the destination alone; while all other gods and goddesses turned in stone images as they were fast asleep. 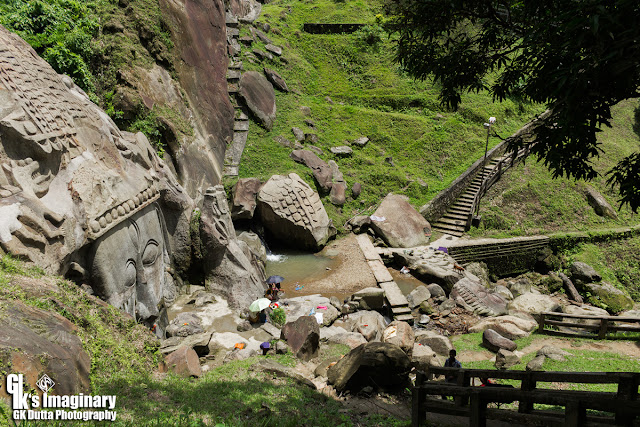 Another story revolves around one Kalu Kamar, the famous sculptor. He was assigned the task to build a crore of the deities in his dream. But keeping the last idol unfinished Kalu created his own image. Thus ‘Koti’ could not be completed. So, the place got its name as Unakoti. 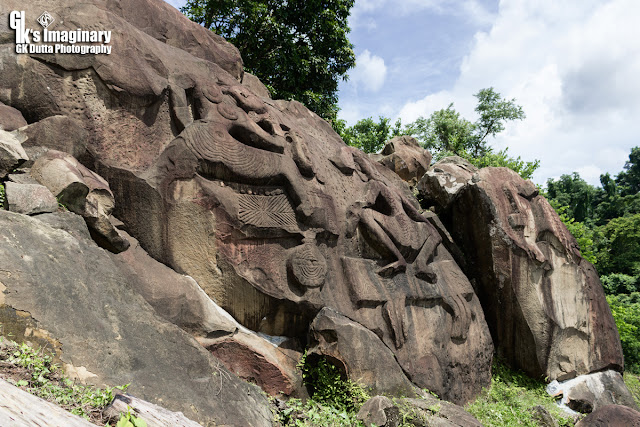 The history of old Kailashahar is also associated with Unakoti. A 15th generation descendant of King Jujhar Fa, a Shiva disciple who started the Tripurabda (Tripuri Calendar), prayed for Lord Shiva in a village called Chhambulnagar on the banks of the river Mau. It is speculated that Chhambulnagar, which is mentioned in Rajmala, was situated near Unakoti Hill. The Prince prayed for Mahadeva in Unakoti. For this some people believe that the previous name of Kailashahar was Chhambulnagar. Some believers thought that Har (Shiva) resides in Kailash. Therefore the place was known as Kailash Har which was later on transformed to Kailashahar. A Tripura king named Adi-Dharmapha ruled here in 7th century. He performed a great yagna with much pomp and gaiety. The name Kailashahar found currency since that time. 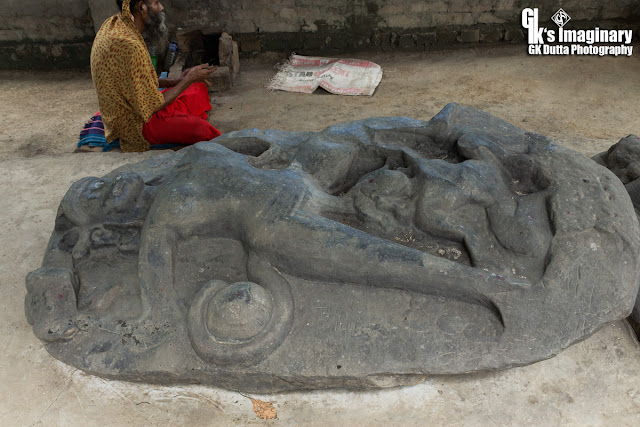 Who created such marvellous rock carvings and the stone images of gods and Goddesses in such a deep forest hundred years ago is indeed a mystery. Why this secluded hilly place was selected for the purpose is not known. But the place is still accessible. But mystery still revolves round Unakoti. The hilly forests, the spring, chirping of birds, the carvings in stones and rocks, the leisurely -scattered idols and hearsay have given a special significance to Unakoti. 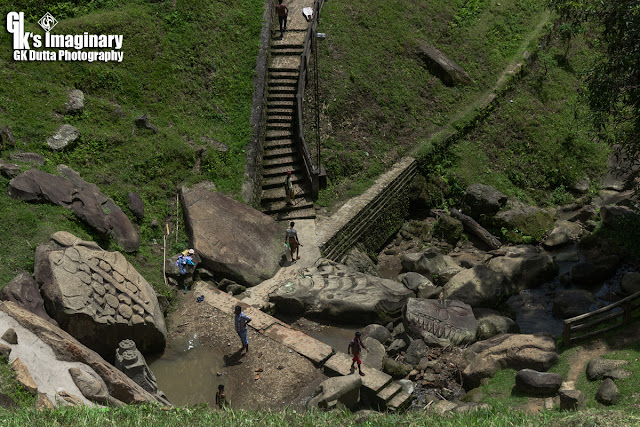